Part of the bargain we struck when we switched from building server-rendered websites to client-rendered SPAs is that we suddenly had to take a lot more care with the resources on the user’s device. Don’t block the UI thread, don’t make the laptop’s fan spin, don’t drain the phone’s battery, etc. We traded better interactivity and “app-like” behavior for a new class of problems that don’t really exist in the server-rendered world.

One of these problems is memory leaks. A poorly-coded SPA can easily eat up megabytes or even gigabytes of memory, continuing to gobble up more and more resources, even as it’s sitting innocently in a background tab. At this point, the page might start to slow to a crawl, or the browser may just terminate the tab and you’ll see Chrome’s familiar “Aw, snap!” page.

The subject of memory leaks is not well-covered in the web development literature. And yet, I’m pretty sure that most non-trivial SPAs leak memory, unless the team behind them has a robust infrastructure for catching and fixing memory leaks. It’s just far too easy in JavaScript to accidentally allocate some memory and forget to clean it up.

So why is so little written about memory leaks? My guesses:

In this post, I’d like to share some of my experience fixing memory leaks in web applications, and provide some examples of how to effectively track them down.

Anatomy of a memory leak

Modern web app frameworks like React, Vue, and Svelte use a component-based model. Within this model, the most common way to introduce a memory leak is something like this:

That’s it. That’s all it takes to introduce a memory leak. If you call addEventListener on some global object (the window, the <body>, etc.) and then forget to clean it up with removeEventListener when the component is unmounted, then you’ve created a memory leak.

Worse, you’ve just leaked your entire component. Because this.onMessage is bound to this, the component has leaked. So have all of its child components. And very likely, so have all the DOM nodes associated with the components. This can get very bad very fast.

Here is the fix:

Note that we saved a reference to the bound onMessage function. You have to pass in exactly the same function to removeEventListener that you passed in to addEventListener, or else it won’t work.

In my experience, the most common sources of memory leaks are APIs like these:

Of course, there are plenty of other ways to leak memory, but these are the most common ones I’ve seen.

This is the hard part. I’ll start off by saying that I just don’t think any of the tooling out there is very good. I’ve tried Firefox’s memory tool, the Edge and IE memory tools, and even Windows Performance Analyzer. The best-in-class is still the Chrome Developer Tools, but it has a lot of rough edges that are worth knowing about.

In the Chrome DevTools, our main tool of choice is going to be the “heap snapshot” tool in the “Memory” tab. There are other memory tools in Chrome, but I don’t find them very helpful for identifying leaks. 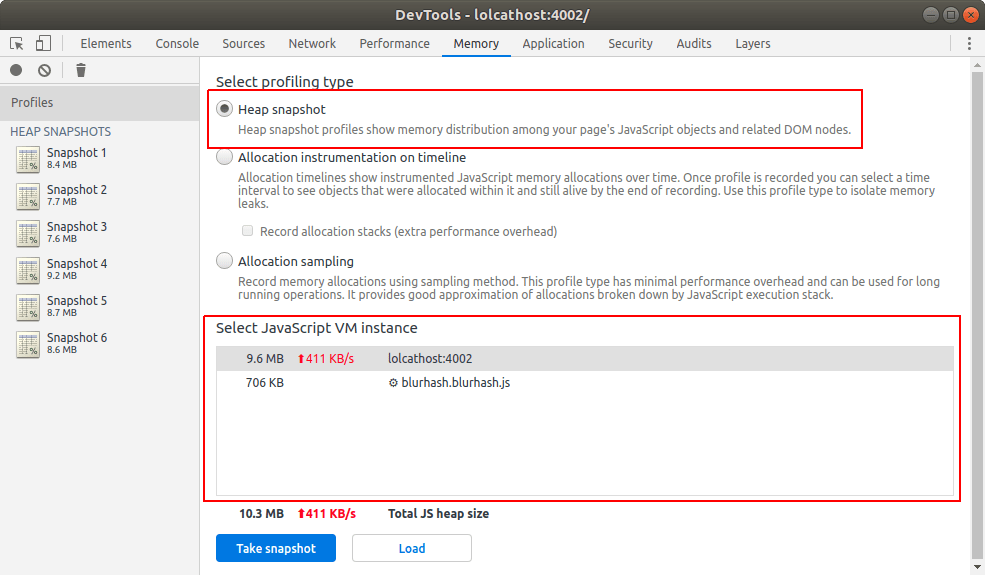 The next step is to reproduce some scenario that you think may be leaking – for instance, opening and closing a modal dialog. Once the dialog is closed, you’d expect memory to return back to the previous level. So you take another snapshot, and then diff it with the previous snapshot. This diffing is really the killer feature of the tool.

However, there are a few limitations of the tool that you should be aware of:

At this point, if your app is non-trivial, then you’re probably going to see a lot of leaking objects between the two snapshots. This is where things get tricky, because not all of these are true leaks. Many of these are just normal usage – some object gets de-allocated in favor of another one, something gets cached in a way that will get cleaned up later, etc.

Cutting through the noise

I’ve found that the best way to cut through the noise is to repeat the leaking scenario several times. For instance, instead of just opening and closing a modal dialog once, you might open and close it 7 times. (7 is a nice conspicuous prime number.) Then you can check the heap snapshot diff to see if any objects leaked 7 times. (Or 14 times, or 21 times.)

(Another helpful technique is to run through the scenario once before recording the first snapshot. Especially if you are using a lot of code-splitting, then your scenario is likely to have a one-time memory cost of loading the necessary JavaScript modules.)

At this point, you might wonder why we should sort by the number of objects rather than the total memory. Intuitively, we’re trying to reduce the amount of memory leaking, so shouldn’t we focus on the total memory usage? Well, this doesn’t work very well, for an important reason.

When something is leaking, it’s because (to paraphrase Joe Armstrong) you’re holding onto the banana, but you ended up getting the banana, the gorilla holding the banana, and the whole jungle. If you measure based on total bytes, you’re measuring the jungle, not the banana. 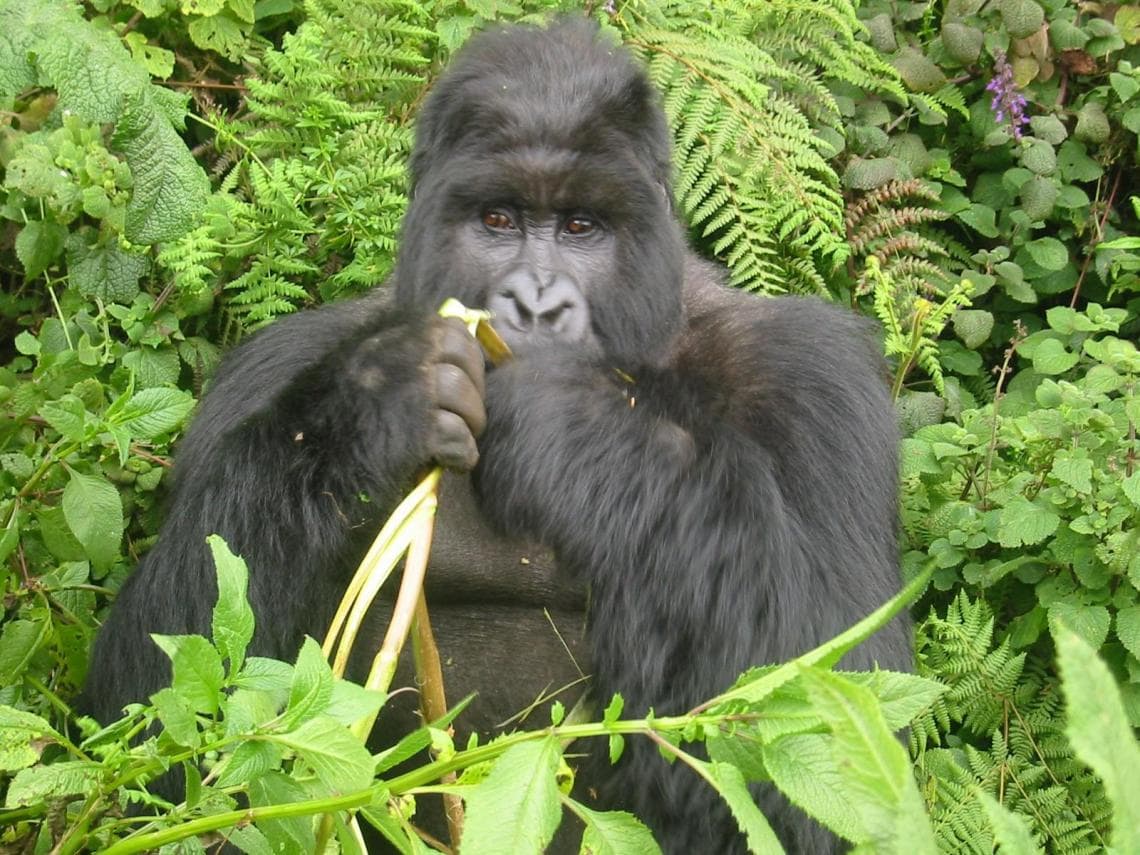 Let’s go back to the addEventListener example above. The source of the leak is an event listener, which is referencing a function, which references a component, which probably references a ton of stuff like arrays, strings, and objects.

If you sort the heap snapshot diff by total memory, then it’s going to show you a bunch of arrays, strings, and objects – most of which are probably unrelated to the leak. What you really want to find is the event listener, but this takes up a minuscule amount of memory compared to the stuff it’s referencing. To fix the leak, you want to find the banana, not the jungle.

So if you sort by the number of objects leaked, you’re going to see 7 event listeners. And maybe 7 components, and 14 sub-components, or something like that. That “7” should stand out like a sore thumb, since it’s such an unusual number. And no matter how many times you repeat the scenario, you should see exactly that number of objects leaking. This is how you can quickly find the source of the leak.

The heap snapshot diff will also show you a “retainer” chain showing which objects are pointing to which other objects and thus keeping the memory alive. This is how you can figure out where the leaking object was allocated.

In the above example, the “context” is the onMessage closure which references the someObject variable. (This is a contrived example; real memory leaks can be much less obvious!)

But the heap snapshotting tool has several limitations:

This is my basic strategy for identifying memory leaks. I’ve successfully used this technique to find dozens of memory leaks in the past.

This guide is just the start, though – beyond this, you will also have to be handy with setting breakpoints, logging, and testing your fix to see if it resolves the leak. Unfortunately, this is just inherently a time-consuming process.

I’ll precede this by saying that I haven’t found a great way to automate the detection of memory leaks. Chrome has a non-standard performance.memory API, but for privacy reasons it doesn’t have a very precise granularity, so you can’t really use it in production to identify leaks. The W3C Web Performance Working Group has discussed memory tooling in the past, but has yet to agree on a new standard to replace this API.

In a lab or synthetic testing environment, you can increase the granularity on this API by using the Chrome flag --enable-precise-memory-info. You can also create heap snapshot files by calling the proprietary Chromedriver command :takeHeapSnapshot. This has the same limitation mentioned above, though – you probably want to take three in a row and discard the first two.

Since event listeners are the most common source of memory leaks, another technique that I’ve used is to monkey-patch the addEventListener and removeEventListener APIs to count the references and ensure they return to zero. Here is an example of how to do that.

In the Chrome DevTools, you can also use the proprietary getEventListeners() API to see the event listeners attached to a particular element. Note that this can only be used in DevTools, though.

Update: Mathias Bynens has informed me of another useful DevTools API: queryObjects(), which can show you all objects created with a particular constructor. Christoph Guttandin also has an interesting blog post about using this API for automated memory leak detection in Puppeteer.

The state of finding and fixing memory leaks in web apps is still fairly rudimentary. In this blog post, I’ve covered some of the techniques that have worked for me, but admittedly this is still a difficult and time-consuming process.

As with most performance problems, an ounce of prevention can be worth a pound of cure. You might find it worthwhile to put synthetic testing in place rather than trying to debug a memory leak after the fact. Especially if there are several leaks on a page, it will probably turn into an onion-peeling exercise – you fix one leak, then find another, then repeat (while weeping the whole time!). Code review can also help catch common memory leak patterns, if you know what to look for.

JavaScript is a memory-safe language, so it’s somewhat ironic how easy it is to leak memory in a web application. Part of this is just inherent to UI design, though – we need to listen for mouse events, scroll events, keyboard events, etc., and these are all patterns that can easily lead to memory leaks. But by trying to keep our web applications’ memory usage low, we can improve runtime performance, avoid crashes, and be respectful of resource constraints on the user’s device.

8 habits you should avoid when developing with Javascript

How to Install Ruby on Rails on CentOS 8